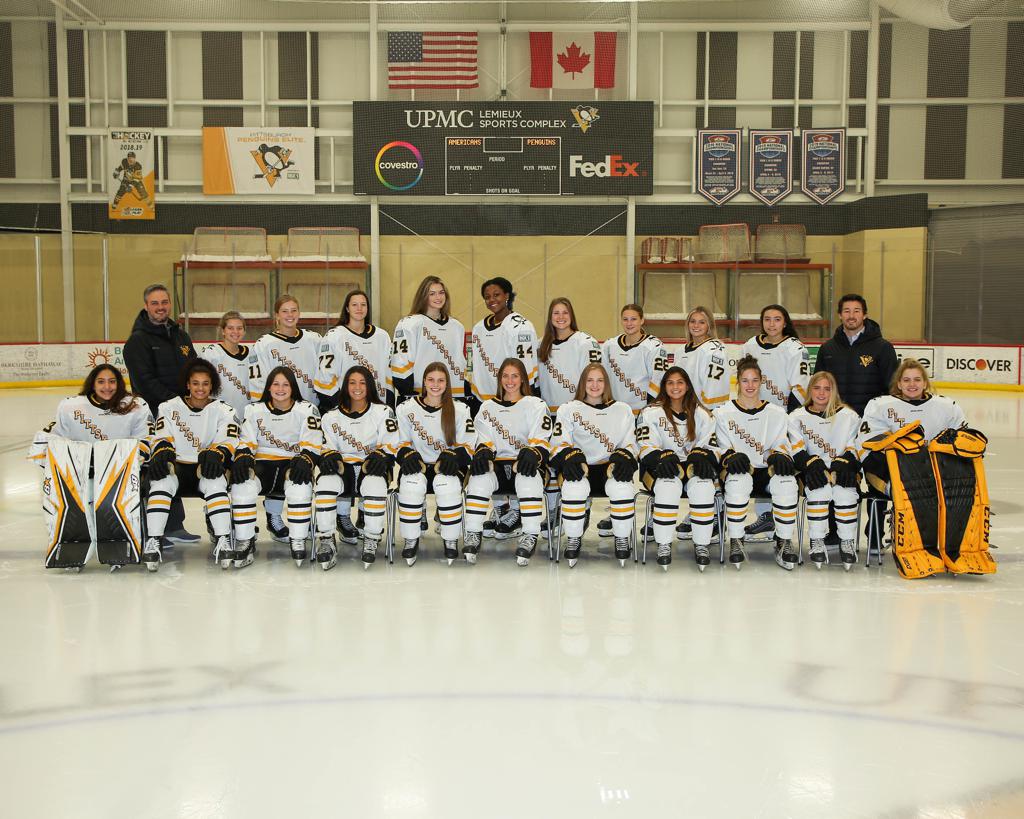 Brianna Walkom, a forward with the DICK'S Sporting Goods Pittsburgh Penguins Elite 19U Girls team has committed to play D-1 college hockey at Stonehill College. Stonehill is located in Easton, MA. To learn more about the program click the link: https://www.stonehillskyhawks.com/sports/wice/index

The file below for Youth and Girls teams have the exact dates and times for 2022/23 Dick's Sporting Goods Pittsburgh Penguins Elite tryouts.

The format of the tryouts will be as follows:

2013-2009: The 1st two tryouts for each age will be split in half alphabetically based on number of players at each position. We will email you one night in advance of the first tryout to indicate if your son/daughter will be in Alpha 1 or Alpha 2. Please check your email regularly to ensure you have the correct tryout group date & time. After the 2nd tryout slot, the evaluators will reclassify and your child will then be placed into Group 1 or Group 2. Following the 3rd tryout slot, there will be a 4th tryout slot only for those invited to the final callback. Groups will be posted on the website each night.

For 2009 birth year players will be required to attend a checking clinic prior to tryouts which is included in your tryout fees.

Girls Teams: All girls will attend all initial tryout sessions listed, except there may be a cut to the final callback depending on numbers. More information will be provided at the tryout check-in.

Once the rosters have been finalized, those who are being offered a spot along with alternates will be posted on the website. Coaches will follow up with a call to welcome everyone to the team and everyone has 24 hours to commit to their spot.

Thanks for your interest in Dick's Sporting Goods Pittsburgh Penguins Elite!

Good Luck at the upcoming Tryouts!

The DICK'S Sporting Goods Pittsburgh Penguins Elite program has helped grow the local youth hockey scene tremendously over the years from both the boys' and girls' sides of the game, sending several players to the NCAA Division I level.

"I came from the college side of things, and the Pens Elite program was always one that was recruited pretty heavily by colleges," said Logan Bittle, head coach of the 19U Girls Prep and 16U Girls squads, who had spent 10 seasons at Robert Morris University as the assistant coach and associate head coach for the Division I women's ice hockey team.

"I think that the biggest difference between the men's side and the women's side is that the girls commit right out of these programs, whereas the boys go to their junior programs after. So this is kind of their stepping stone to the next level."

Bittle was no stranger to handing out scholarships during his 10 years of coaching at Robert Morris University. However, this was the first time he was on the other side, experiencing players he coached sign an NLI. The girls commemorated it with a photo opp featuring balloons and gear from their new schools at UPMC Lemieux Sports Complex.

"Charlotte and Alexis' families were able to come down. We Zoomed in Annie's mom as well," he said. "You have to share that moment with their families because it takes a village to get to this point, for sure. And to see them and how excited they were, that's kind of what it's all about."

Hallett, a defenseman on the 19U Girls team, committed to Syracuse University. Perhaps no one knows her game more than Bittle, who has no doubt that the Toronto native's skills will translate to the next level.

"She can skate the game really well," he said. "(She) has a great shot, works really, really hard on and off the ice. And having coached in Syracuse, I know she's going to fit in very well there. She's their type of defenseman. She just plays hard, mean and tough, and has that skillset too, which is awesome."

Perry, a forward on the 19U Girls team, committed to Holy Cross University. Bittle believes she is one of the team's most talented scorers.

"She has a lot of offensive skill. Great around the net, has great vision," Bittle said. "She has the ability to change games when she wants to and has been a big part of the success we've had this year."

And Abramson, one of the team's goaltenders, committed to Long Island University.

"She's done a nice job of battling in the net, keeping us in games and giving us an opportunity to win every game that we're in," Bittle said. "So we're excited to see what she can do with that opportunity at Long Island."

Meanwhile, Schade is an alum of the Penguins Elite program. From 2016-2020, the Mars, Pa. native cemented himself as an elite player for his age. As such, the Lincoln Stars selected him with the top pick in the 2019 USHL Draft. Schade was an early verbal commit to Penn State when he was just 14 years old.

"He was an early commit before they changed the rules," said Brian Mueller, executive director of hockey development and programming. "Probably one of the highest competitors, the most compete level. He's an animal. He loves to compete, play hard. He always wants to be a difference maker. He's very assertive in how he plays the game. We're extremely happy for him."