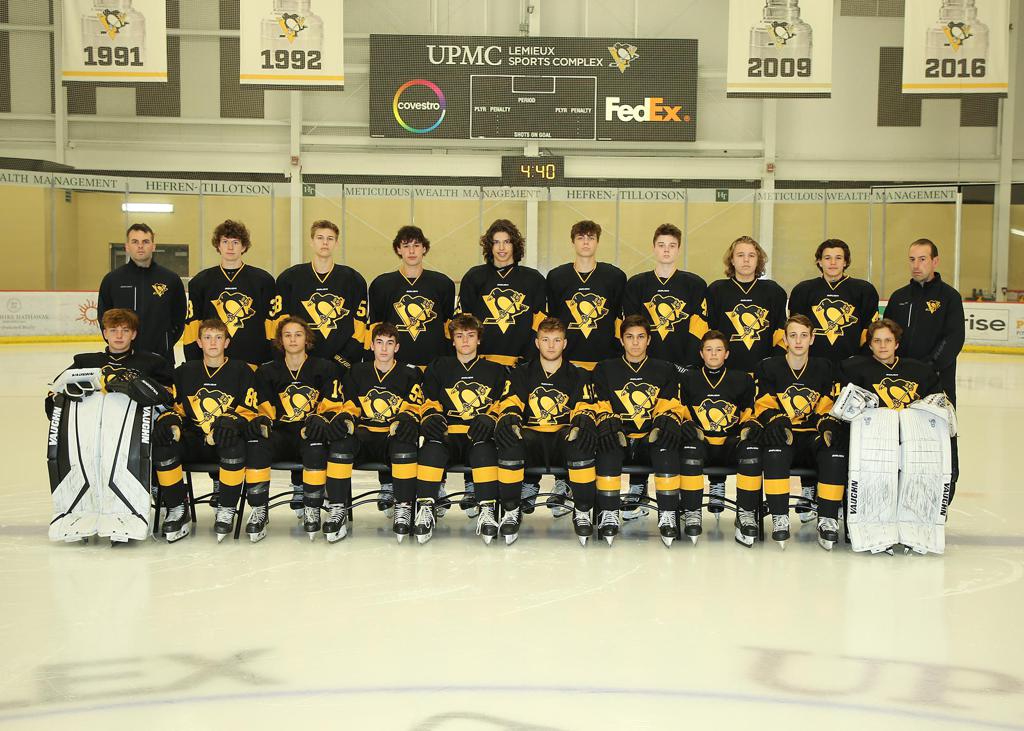 After a great weekend at the MidAm Tournament in Columbus, the 14U, 15U and 16U DICK'S Sporting Goods Pittsburgh Penguins Elite Boys teams are heading to the USA Hockey National Championships!

The 14U Boys team started their undefeated weekend with a 5-2 win over the Ohio Blue Jackets and a 5-0 shutout of the Pittsburgh Vengeance on Friday. They sealed their spot in the championship game with a 5-1 win over the Tri-State Spartans the next day. In a thrilling game to clinch their spot at Nationals, the Pens Elite team topped the Cleveland Barons 6-5 in overtime. The team earned their spot at the USA Hockey National Championship in Dallas, Texas from April 28 - May 3.

The 15U Pens Elite squad also had an undefeated district tournament starting with a close 2-1 overtime victory over the Pittsburgh Predators. The next day, they won back-to-back games, 3-0 over the Esmark Stars and 3-1 over the Mt. Lebanon Hornets to earn a spot in the decisive championship game. With a spot in Nationals on the line, the Pens Elite team topped the Ohio Blue Jackets in shutout fashion with a 4-0 final score. The 15Us also punched their ticket to Dallas for the USA Hockey National Championship.

The 16U Boys had a dominant weekend with four consecutive victories to also clinch their spot at Nationals. Their first game was a 8-2 win over the Cleveland Barons followed by a 6-2 victory over the Mt. Lebanon Hornets later that same day. The next day, the 16Us topped Gilmour Academy 9-1 to seal a spot in the district championship game. The 16U Pens Elite squad finished off the weekend with a 5-1 win over the Esmark Stars to confirm their spot at Nationals. Maryland Heights, Missouri, near St. Louis, will be the site of the 16U tournament.

Congratulations to all three DICK'S Sporting Goods Pittsburgh Penguins Elite teams on this outstanding accomplishment and good luck at Nationals!

USA Hockey’s National Team Development Program is a full-time program designed not only to prepare students-athletes for success on USA Hockey national teams and their future hockey careers but also for being a well-rounded individual off the ice. Notable alumni of the program include Patrick Kane, Auston Matthews, Phil Kessel, Jack Eichel and Jack Hughes.

Brandon, a forward and Zack, a goalie are both members of the 15U Pens Elite team. Both players are also members of the EXCEL Hockey Academy at the UPMC Lemieux Sports Complex.

Congratulations to Brandon and Zack on the invitation and good luck!

PPE Teams Give Back During the Holidays!

As the holidays approach, members of the DICK'S Sporting Goods Pittsburgh Penguins Elite organization have shown their commitment to community service. The PPE organization’s dedication to giving back is a year round commitment but during the holidays, several teams have undertaken initiatives to spread cheer and benefit local organizations and initiatives.

The Pens Elite 2009 Conway team gathered and packed personal care items for 110 residents of the Riverside Care Center. With the holidays coming up, this act of kindness will provide small gifts to residents that will not have any family or friend visitation during this time.

2011/2010 Edwards took part in the Play it Forward Pittsburgh gift drive collection. This initiative is celebrating its 10th year of donating gently used toys to families in need in the Pittsburgh area. Similarly, 2011 Attanucci took part in the Toys for Tots program which donates new toys to less fortunate children in the community each Christmas. The 19U, 16U and 14U Girls teams took part in a toy drive and donated to Moon Police Department, where they provided unwrapped children’s toys and books. 2009 Nelson also took part in a you drive as they shopped for toys to donate to the Northside Commons Missionary toy drive.

The 2006, 15U, 16U and 18U teams participated in the Friendship Bag Project. Together teams were able to provide over 70 small holiday gift packages which will be presented to a child in need in Washington County. The package consisted of a personal item, a small article of clothing, an activity item and an edible item. 10U Tindall provided care packages for sailors stationed on the USS Dwight D. Eisenhower and also supported the local charity Bethlehem Haven with their care packages.

Thank you to all of our DICK'S Sporting Goods Pittsburgh Penguins Elite teams and players for your commitment to serving your community!